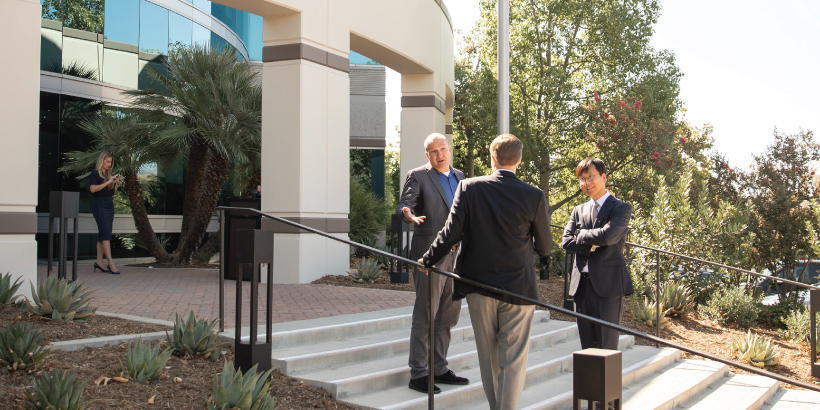 There is nothing on this earth more to be prized than true friendship."

Graziadio is proud of the long-life friendships that are created and fostered as a result of our integrous and values-based community. Master of Business Administration students, Jeongmin Kim (MBA ‘20) and Matthew Pryatel (MBA ‘20), have developed an everlasting friendship during their time at Graziadio. They have spent ample time together growing their friendship in addition to their business knowledge and applications.

From collaborative academic projects to deeply invested business case competitions, Matthew and Jeongmin have proved their friendship brings limitless potential for their academic and professional careers. Jeongmin and Matthew share something valuable that should be instilled in all students—friendship.

What drew you to Pepperdine when you were considering your MBA?

Jeongmin: I worked for about 15 years when I decided to get an MBA. I was a firmware programmer for cell phones, and dealt with the end-to-end process of SAP ERP (Enterprise Resource Planning) modules. I discovered pain points of colleagues and solve them by enhancing the ERP system. According to the size of the task, I made contracts for the project or designed and developed the system. As the system enhanced, my colleagues were satisfied with the system.

I needed to know their work at a very deep level.

In addition, I had pressure to maintain my life and work balance. IT project and system maintenance requires work at night or on weekends. I worried about not having much time with my kids.

Fortunately, my company sponsors to study at graduate schools. It was the best chance for me. In my situation, applying for the global MBA program was the best. I knew that the MBA was not a good program for life and study balance. However, it was better than my work.

I got approval from my company in December 2017. I had to get admission for the coming fall referring to my time with my first daughter. I moved quickly. I applied to some schools in Los Angeles area. I chose Pepperdine.

This was my criteria for choosing a school:

Matthew: After two decades spent managing grocery stores, I wanted a whole new career and was disappointed when I didn’t get into UCLA, as on paper I was more competitive than your average Bruin. Over the hill at Pepperdine, somebody must have seen some potential, must have thought I was capable of fulfilling their idea of what a best for the world leader should be, because I was offered a scholarship that I ultimately accepted.

The quality and value of the education we’ve received, especially from the time spent outside the classroom asking questions, exploring ideas, and discovering new connections with professors, administrators, and other friends of the University (not to mention each other), has wildly surpassed my expectations and is second-to-none. The encouragement and assistance we’ve received in carving our own trails, the enthusiasm with which so many have sacrificed and shared their time and energy to heighten and further our ambitions, has been so remarkable, so powerfully tailored to our unusual abilities, that where we are now, with the opportunities that await, never would have happened anywhere else but Pepperdine.

How did your friendship begin and evolve while studying at Pepperdine?

Jeongmin: I need some close friends. When I tried to find someone similar with my age. I found Matthew. He was bold and old. I texted him to go together for gathering in a restaurant. We had a lot of conversations that night. I felt he was a good guy.

There was an AT&T case competition in the first fall trimester of 2018. We had great progress in working together. In other classes, we were in the same team. We knew that we were different and that’s why our teamwork made the outstanding output.

Matthew: Our friendship has played such an integral role in how my Pepperdine experience has unfolded.  It was during orientation, after the first day of our retreat in Ventura, and we had hardly gotten past the basic introductions. That set the stage for what has become one of my most treasured relationships.

The case competition happened about a month later, and the quality of our work, and how enjoyable it was even with the long hours and pressure to perform, were impossible to ignore. It wasn’t intentional at first, but having similar interests drew us to the same classes, and having worked so well as a team it only made sense to take them together. We had such good results that eventually we decided to do almost everything as a pair. It works because, while our individual viewpoints and processing methods couldn’t be any more different, we share the same passion for growth and improvement, so our overall purpose always has clarity even though what we bring to the table is so dissimilar.

What advice do you have on the importance of creating friendships?

Jeongmin: Trust is the best value for creating friendships. We tried to keep promises. When we trust each other, we were very comfortable in discussing ideas. Now we can disagree without hurting the other.

Similar interests are important. We need to share something. We like analysis and technology. Later, we shared interests in soft skills such as human network and dispute resolution.

Matthew: Honestly, I think being involved with public and customer service for so many years, dealing with people at some of  their worst moments, I’d become cynical about people’s motivations.In so many ways coming here has been like emerging from a fog, and none is more striking than the change in how much I value relationships.

I think learning the networking game is an awkward experience for most people, but once we learned the ropes, there was so much more to be found at these gatherings if you just focus on learning what makes people special rather than how knowing them will help you.

The friendships I’ve made and emotions we’ve shared mean much more to me than the scholastic successes we’ve enjoyed or the career opportunities that have developed. In the ultimate irony, we’ve found more success and more opportunity by focusing on anything but “what’s in it for me?”

How do you two intend to apply your MBA from Graziadio post-graduation?

Jeongmin: I’ll work for an international business and strategy position. I got great experiences about cultural difference, dispute resolution, and leadership at school.. My current employer, Incheon International Airport Corporation, has some overseas branches and provide various opportunities.

I want to work with people from different backgrounds and make effective outcomes from the variety. I am sure that my cross cultural understanding, negotiation and other dispute resolution skills will help me to get through the unfamiliar environment.

I want to work in a strategy position. Airports are expanding their borders to business and entertainment area by developing adjacent areas.  I want to integrate my industry experience and skills learned from school; creative approach, digital innovation, and data analytics.

I am going to pursue a doctorate degree. I am interested in information technology, strategy, and change in organizational culture.

Matthew: We are constantly having discussions about how one aspect or another of something we’ve just learned applies or modifies some conception.

For example, as businesses grow, how can they maintain the entrepreneurial mindset of embracing risk and valuing creativity, while simultaneously creating the structure and predictability (also known as the enemy of new ideas) required to sustain their larger size?

In other words, how might the full-bellied adopt the hungry approach to risk? Or, can bias be accounted for?

I am interested in investigating questions like these and my next steps most likely will involve a doctoral program in or involving cognitive science. I am especially intrigued by the PhD in Social and Engineering Systems and Statistics offered through MIT.

The ultimate goal is to find the best combination of programs, mine in cognitive/social science and Jeongmin’s in computer science, that is likely to produce the most progress towards a solution.

What is a favorite shared experience that you have had at Graziadio so far?

Jeongmin: It is the AT&T competition. We discussed seriously about what was the best idea for spurring customer engagement subscription-based video product. We shared opinions openly and made a creative approach to the problem.

There are other experiences between us such as staying at the library until midnight or attending a global business program to Ireland.

Matthew: As part of our entrepreneurship class, we had devised a business plan that would provide technological consulting specifically to small businesses, intending to concoct and implement simple, low-cost techniques to realize some of the business benefits of technology. We hadn't taken the idea seriously, but we received a lot of positive feedback and encouragement, especially from some of the business people in our network. However, we came to realize that our idea, if applied to people, might allow them to be more competitive. It was an intriguing notion. While it was purely theoretical, it raised an unexpected conundrum: the goal for most business students was to create value and reap the monetary rewards that might result. But what if we could make humans more valuable? Which contained no apparent reward.

We couldn’t even take the business idea seriously anymore, given what was on the other side of the ledger. Right there, sitting in the parking lot, we made a commitment to one another to jettison our other opportunities and commit to making people matter (again).