One Brand, Many Trajectories: Narrative Navigation in Transmedia

We are surrounded by stories and narratives: books, theater, television, cinema, videos, news, and even gossip. As the COVID-19 pandemic hit and shelter-in-place orders took hold, daily consumption of streaming TV and video narrative content grew nearly 40% globally. In an era of “transmedia” where content flows across multiple media channels almost inevitable, how are omnipresent narratives consumed? The answer is far from simple.

According to Cristel Russell's paper with Stéphanie Feiereisen (Univ. of Montpellier), Dina Rasolofoarison (Univ. Paris Dauphine), and Hope Schau (Univ. of Arizona), which will appear in the Journal of Consumer Research, there are different narrative positions that consumers may adopt as a function of their navigation of the pull and permeability forces. They observe consumers who speed up to swallow or devour slower paced series by removing what they perceive as unnecessary or empty content. Examples include skipping dialogue in Sex and the City to get to the story point, or only watching certain scenes in Homeland after reading online summaries of the episodes, replacing parts of the primary text with transmedia content to save time. In contrast, some consumers may need breaks to better digest heavy, dense content. It is the combination of these navigation tools of slowing/speeding, augmenting/condensing that create nuanced, complex trajectories across the narrative space.

I (Cristel) met Stephanie and Dina at the European Association for Consumer Research conference in Barcelona in the summer of 2013. The two ‘French girls,’ as I have come to refer to them, approached me shily after I gave a presentation on my brand backstory project (a project which is still ongoing by the way!). The two of them were friends and just finishing their PhD, and they had started conducting qualitative interviews for a research project on ‘binge watching’. They had high hopes that this budding project could turn into a top publication, like JCR, the premier consumer research journal.  Given my research on entertainment consumption, they came to me for advice.

I was happy to meet fellow ‘French girls’ and hear about their project.  At that time, I honestly did not think a project on ‘binge watching’ was theoretical enough to make it to a top journal (and I am pretty sure I expressed this concern to them). But they were so enthused and so ‘hungry’ that I offered to help them out, give them guidance, and see where this would take us. I also volunteered my good friend and colleague Hope Schau who, like me, had had good success at JCR with her projects related to fandom.

And so the team of four embarked on this adventure.  The first, crucial, step was to make it clear that this would not be a binge-watching project, but a narrative consumption project. Our research question was not: ‘do people binge watch and how’ but ‘how do people watch TV series in an age of increasing access and control of amount and pace of ‘consuming’?’ Our second step was to create a one-page outline of what an ideal JCR submission would look like, including the ideal data plan. I do this for every project: imagine the ideal paper and work toward that goal. Then we divided the ‘work’: Hope and I would guide the conceptual development, and the French girls would be in charge of data collection. Together, the four of us would analyze the data and, in a manner typical of grounded theory, we would tack back and forth between the emergent findings and the literature to which those themes would connect.  This exercise led to us to read broadly and widely: in communications, we read about transmedia; in literary theory, we re-read research on intertextuality and reader-response theory, and, my personal favorite, we delved into narratology and the French classics, from Genette to Barthes.

Slowly but surely, the project was advancing.  We presented our work a LOT:  every year we would try to get together and present at a high-profile conference, and whenever one of us was invited to give a talk at a university, we would present this work and get feedback.  We got LOTS of feedback and, every time, we would regroup and discuss how to incorporate it and strengthen our paper.  Here is a photo of the team at a 2016 conference in France.

When we reached a point of theoretical saturation where we felt that we had sufficient insights about how consumers were navigating the time and space of TV series (augmenting, distilling, etc), we crafted a first submission and bravely submitted it to JCR in 2017. That first submission was positioned as ‘beyond narrative transportation’ which was the primary theory in consumption of entertainment, an drawing on from data collected via interviews and diaries.

Two months later, we received a very critical but hopeful ‘risky revise and resubmit’. Although the news was good, the Editorial team made it clear that the paper needed everything new: new positioning, with probably new literature, revised model, clarified concepts, collection of more or different data.  Given JCR’s very low acceptance rate, this was a coup. The reviewers’ comments were polite and constructive: they clearly saw potential in the paper but there was still a whole lot of work to do. So we made a new outline of the ideal resubmission and went back to work.

We needed to go beyond the diaries / interviews dataset on which our first submission was based.  To understand how people watch TV series, how cool would it be to actually get closer to that phenomenon? We decided to supplement our data with videography: Stephanie and Dina put cameras in the homes of 5 couples and 1 informant and asked them (with IRB approval of course) to record themselves watch TV and then to talk to us about it (very cool method!).  We also collected and analyzed conversations on fan forums, which is Hope’s netnographic method of predilection.  While we worked on this, we kept on presenting at conferences and in research seminars to solicit feedback on our revision.

Fast forward to 2019: the paper had changed drastically.  In fact, it was almost a wholly new paper. We had taken to heart every comment from the review team and the paper was now about ‘Narrative Navigation in Transmedia Space’.  It had taken us two years but it felt like it was gelling, the new datasets had solidified our understanding of the dynamics of narrative consumption and we better articulated the key drivers of these processes: the primary text’s gravitational pull and its permeability to transmedia. Our hard work on this resubmission earned us another revision request, but this time we could see a clear path forward. The editor said: “all members of the team perceive significant progress in this re-submission but, simultaneously have some remaining concerns that need to be addressed. While the remaining concerns are serious and a significant revision is required to bring this to the level of contribution that the Journal of Consumer Research seeks to publish, the current significant progress mitigates some of the risk with the prior submission.” 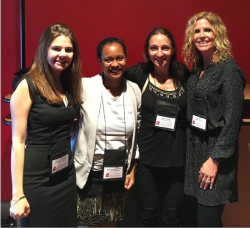 We were closing in!!  It took us another six more months to revise.  No new data were needed, but the front and back ends of the paper still changed drastically in response to the comments.  We worked our butts off, zooming weekly to keep the pace.  The revelation came from realizing that navigating narratives in the transmedia bore many similarities to ways of eating: some gorged, some nibbled, some swallowed, etc.  We decided to embrace this metaphor and developed a typology of narrative positions that consumers may adopt as a function of their navigation of the pull and permeability forces.

In July 2020 came a Conditional Acceptance!!  The French girls were ecstatic: they may soon have “A JCR”!!!  Although the reviewers’ comments were very positive and this could have been a simple revision, there were lingering comments from Reviewer 3 that bothered us:  Had we really documented narrative trajectories?  Weren’t we mostly documenting narrative positions with our nibbling, sampling, etc?  Although the editorial team was not asking us to do so, these comments led us to a rather significant re-exploration of our data, re-writing of the findings and, most significantly, expansion of the discussion: the narrative navigation and trajectories we had unearthed did not apply to just TV series but to narrative brands more generally. So we had an opportunity to expand our contribution to show how consumers may have multiple trajectories when consuming a brand narrative.  Not only was the paper not at all about binge watching, but it was also not just about TV series. TV series were just the context in which these foundational processes of narrative navigation were documented.

In the end, we hope that many will enjoy reading ‘One Brand, Many Trajectories: Narrative Navigation in Transmedia,’ which is now forthcoming in JCR.  We hope that our findings will resonate with the readers. We also hope that our journey will motivate many other “French girls’ and other junior scholars to be brave and seek guidance from the more experienced (dare I say ‘senior’) scholars.