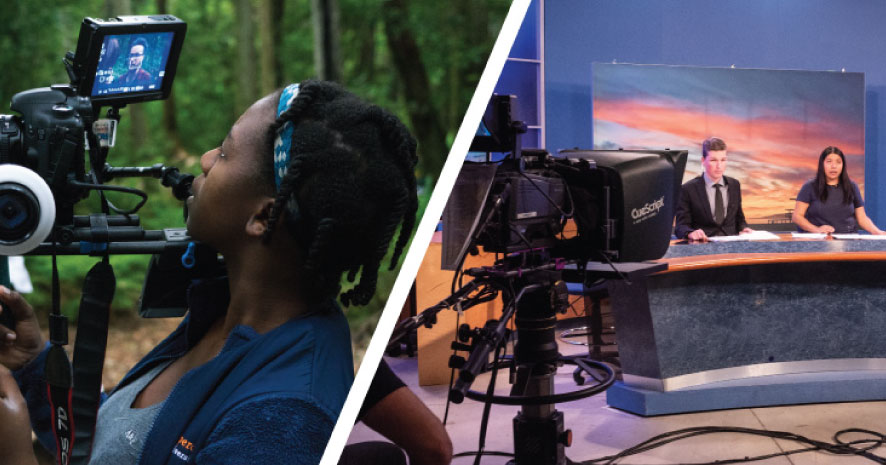 Most everyone has a form of entertainment they enjoy. Whether it be music, movies, television (did you know that Zoey 101 was filmed on Pepperdine’s campus?), novels, theater, or anything in between, the entertainment industry is a staple in global business and pop culture.

So, as fresh social narratives and technologies drive innovation forward in entertainment, what are the current and future trends to expect in the industry?

Throughout this feature, we’ll explore:

To start, it’s critical to consider why the entertainment industry changes. While there are various factors one could argue spur adaptation, key elements must be considered.

Entertainment is a Business

While entertainment is considered by many as a form of art (which it is), it’s also a business. The entertainment industry is a complex enterprise that employs and serves various stakeholders and generates billions in revenue every year.

Because it’s a business, the industry must remain open to evolving as time progresses – as many of the best companies do to maintain their competitive advantage.

While the entertainment industry has always provided commentary on social, political, and economic issues, it does so in a compelling way. How? Directly (or sometimes indirectly) through the work they produce.

Have you seen the film Don’t Look Up, by Adam McKay? Or read the novel The Help, authored by Kathryn Stockett? Listened to the song “This is America”, recorded by Childish Gambino? Whether you answered yes or no, each of these forms of entertainment provides subtle or direct commentaries on specific issues – whether it be social, political, economic, or anything else.

The takeaway is that entertainment acts as an ideal conduit for presenting a narrative to hopefully spark change. Whatever the issue may be, whether a hot-button topic or something less controversial, entertainment uses its platform to present a narrative to audiences. As times change, so does society and so do the stories that need to be told.

The Idea of Entertainment Keeps Evolving

While the concept of “entertainment” is somewhat subjective because everyone defines their versions of entertainment differently, the entertainment industry continues to grow as new concepts come to fruition.

Whether it be an industry like cinema creating original concepts for screenplays (Jordan Peele’s Nope) or developing an entirely new industry like the world of virtual reality (Metaverse, anyone?), entertainment evolves alongside culture.

Current Trends in the Industry of Entertainment

One of the most exciting parts of entertainment is keeping up with what’s trending—in all categories. Let’s further explore.

Let the Streaming Wars Rage On

Currently, one of the most notable and impressive feats is the war between all the streaming services. The bad news? It’s hard to keep up with all that’s available. The better news? There’s a wide array of original content for diverse interests and people.

Whether it be Netflix’s approach of dropping new movies every week or HBO’s focus on storytelling of the highest quality, streaming has provided a myriad of benefits to the industry, including highly appealing to the audiences.

Content applies more broadly here as almost every form of entertainment requires content, which is better defined as the “stuff” going into making the experiences entertaining.

For example, TikTok users rely on creating a constant stream of videos with different ideas to engage their audiences and gain followers. More often than not, the more popular a TikTok influencer becomes, the more content audiences expect from them.

Social Commentary is Stronger Than Ever

In the internet and social media era, the entertainment industry is more “woke” than ever before. Why? Well, it’s partly due to having nearly immediate access to the internet.

The digitally connected world shares and consumes content instantaneously – as a result, it’s allowed news of any type to gain public attention quickly. While this doesn’t happen all of the time, it’s pertinent to remember that the internet (social media, more specifically) has somewhat created a culture of “accountability” that attempts to bring to light problematic issues.

Diversity provides some of the best opportunities for unique storytelling, especially as things change. Most everyone enjoys something different from time to time. Sharing unique stories creatively through entertainment is a fantastic way to bring diversity to the masses while reminding us that maybe we’re not all that different.

Much like life itself, there are infinite opportunities for improvement. The entertainment industry (like any career) provides possibilities to learn.

If you want to follow the academic route, you can learn through programs and institutes, such as the Institute of Entertainment, Media, and Sports (IEMS) at the Pepperdine Graziadio Business School. Reports like Graziadio’s "The MEDIA Report: Media & Entertainment Data In America 2016 to 2022”, written by Nelson Granados, PhD, professor of information systems and technology management and executive director of IEMS, and Amy Zwagerman, program manager of IEMS, provide insight into current and future trends in entertainment.

Entertainment allows individuals to express themselves and share their stories in special and exceptional ways, giving audiences the unique opportunity to relate and share in some of those special experiences.

Whether you appreciate the entertainment industry from afar or work directly in “the biz”, one thing is certain – we can all benefit from positive forms of entertainment.

Careers
Business
Entertainment
Related Posts
From Curriculum to Career: Taking Best for the World Leadership Beyond the Classroom
A Life of Luxury: How Luxury Brands Remain Relevant Through Cultural Shifts and the Changing Business Landscape
A Changing Tide - How the Entertainment Industry is Making Waves in the Modern Era
Take the Next Step