A Love Story that Began at Pepperdine Graziadio: Loy Oppus-Moe and Jeff Moe Share their Success in Marriage and Business 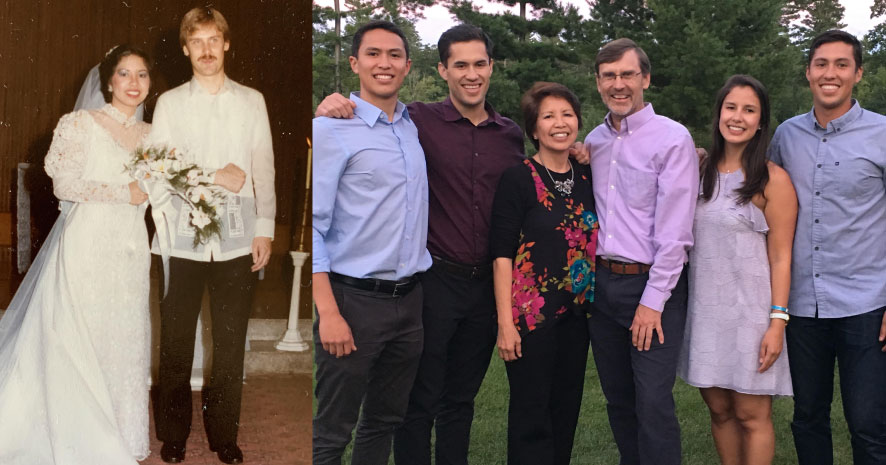 Sometimes love is knocking at your door and sometimes it happens when you least expect it. Falling in love might even mean going to Pepperdine Graziadio Business School and walking out with a degree in one hand and your future spouse in the other. For Loy Oppus-Moe (MBA ‘82) and Jeff Moe (MBA ‘82), this was just the beginning of a lifetime together.

Love sparked on their first day of MBA classes at Pepperdine’s Santa Clara campus, pursuing a graduate degree while both working at Intel Corporation. From that day on, Loy and Jeff were meant for one another and created a life together. The couple has taken on the world of entrepreneurship by founding Auxillium West HR Software in 1996, supporting organizations in their desire to establish effective and efficient administrative processes with HR software. Loy and Jeff also have a passion for non-profit organizations, giving their time as education-based board members. With almost 40 years of marriage and 4 children, the two love birds – from Loy’s perspective – share their secret to finding love at graduate school and success in business and relationships.

What programs were you and your husband, Jeff, in when you attended Pepperdine and how did you two meet?

Jeff and I were in the Graziadio MBA Program together in Santa Clara, California. We both worked at Intel Corporation but had not personally met each other. Jeff worked in HR, handling International Personnel, while I worked in Major Accounts Marketing. During the first day of class, Jeff recognized my name when the professor did a roll call, introduced himself, and we sat next to each other. One day during breaktime, Jeff invited me to join him for a soda at a vending machine across the street. I declined, and Jeff, feeling rejected, didn’t ask me out again until the program ended over a year later!

What caught your initial attention when you met Jeff?

We actually did not go out on our first date until after the MBA program was over. The class schedules were quite intense – meeting every Monday evening for 4 hours, and all day Saturday, while working full-time at our jobs.  Jeff remembers his time being consumed by working long hours, going to class, studying, eating, and sleeping. There was no time for anything else, including socializing and dating. Our first date was after graduation: November of 1982. We were engaged six months later and got married in November of 1983. The friendship was longer than the courtship! Jeff was responsible for ensuring the proper onboarding of international personnel at Intel. I had recently arrived from the Philippines on an AIESEC Traineeship program. Looking back to that time, we laugh about Jeff advising my manager to send me back to the Philippines when my traineeship ended, in order to minimize legal fees for the company. On the contrary, my manager told Jeff that he adamantly wanted me to remain at Intel! If not for my manager, the potential for a future “first date” would not have existed!

What was your favorite memory together while you were still in school?

My favorite memory was an all-day Saturday class. During breaks, I would hang out with Rose, a classmate. Jeff would hang out with Stan, another classmate. I had heard that Jeff lived in a house with a swimming pool. Rose and I talked about the possibility of a pool party at Jeff’s place, but he never hosted one. It’s another story that we laugh about, looking back.

For Jeff, his favorite memory was all the classes where he got to sit next to me. In addition to that, Jeff enjoyed the learning environment and the enthusiasm and knowledge of the students and professors. He enrolled in the MBA program two years after starting his job at Intel. Having that work experience provided a framework through which Jeff’s MBA learning was memorable and relevant, more so than when he was pursuing his undergrad business degree.

Since graduating, where has your degree taken you both in your careers?

My MBA from Pepperdine Graziadio enabled me to take on larger responsibilities in my marketing and product management roles at Intel Corporation, then later at Hitachi America, Ltd. When we started having children, Jeff and I discussed childcare options that would best serve our young, growing family. We decided that I would take a break from my career and focus on raising the children. This turned out to be an excellent move as I developed skills and experience in other aspects of my life, such as volunteerism in education, community engagement, and working with non-profit organizations. Also, I was able to participate in the development of Auxillium West HR Software (see below). When our youngest child left home for college, I re-entered the workforce focused on education-related non-profit work.

The Graziadio MBA degree motivated Jeff to pursue career advancement. After moving to two other companies, Jeff founded Auxillium West HR Software. From Jeff’s perspective, having our own business allowed us the flexibility to remain active in our children’s lives. He also liked that our children could work in our business (sometimes begrudgingly), which helped us in our career development. Jeff mentioned that my sales and marketing skills were critical to the success and growth of the business.

After almost 40 years of marriage and four children, what do you value the most about your relationship? What is the “secret” to your happiness?

As for Jeff, he values being committed to growing the relationship and making the decision to love. He would also go with my 5 F’s.