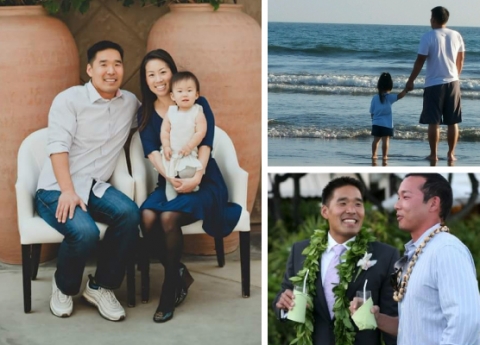 “A profound truth,” according to Pepperdine University Graziadio School alum Michael Won, “is that men hate to shop for clothes.”

When they do, says Won, they don’t know what’s in-style or trending.  With so many fit options available, off-the-rack sizing is inconsistent.  Personalized tailoring is too expensive.  Overall, brands and styles also come and go with remarkable frequency.  “The way men ‘want’ to shop and the way they’re ‘forced’ to shop are still miles apart,” says Won.

Founded by Won and his business partner Elbert Song, 8/Omakase is uniquely named for a reason.  The Orange County-based company provides 8 packages of curated, custom tailored items per year (at least four items per quarter).  “Omakase” is borrowed from the term often used in sushi restaurants where the customer entrusts the chef to serve as he sees best.

“The process is pretty straightforward: tell us your style, complete the sizing algorithm, our tailors will get to work and you receive packages containing on-trend clothing,” explains Won.

Won says a significant upside is that the clothing is a $2,500 value for $300 in quarterly dues, saving customers more than $1,300 each year compared to traditional made-to-measure clothing options. Also customers keep the clothes they like and can return those they do not.  A post-ordering tailoring option is also available if tweaks need to be made to the fit.  There is never a shipping fee.

The idea for 8/Omakase was born in 2014 when Won learned about the burgeoning tailoring industry in Thailand through Song, his lifelong friend and current business partner.   Traveling in Thailand, Song was amazed at the work of local technical designers and pattern makers.  Song and Won believed there could be a future small business guiding these talented clothing makers though an innovative, high tech approach.  They also knew, in spite of widespread hardship, they could help Thai clothes makers achieve greater personal prosperity with access to a broader marketplace.  Won and Song set out developing and refining a business plan.

Today, the small company, which launched in February 2015, has big plans.  They’ve implemented a robust customer acquisition plan and have a newly updated website: http://8omakase.com/.  They have an early strong customer base, but plans call for expanding online presence to encourage more purchasers across the U.S.  Eventually Won and Song envision orders coming from around the world.   At the same time, 8/Omakase is also working toward a mentoring program and professional-level opportunities for clothing makers who aspire to sales, operations and management positions in Thailand as well as developing budding entrepreneurs here in the U.S.

In the future, says Won, high tech will play a much greater role in clothes shopping.  “We’re transitioning from being a made-to-measure clothing brand to being a service that fixes the archaic men’s shopping experience.  Without disclosing too much, we believe technology like 3-D imaging and virtual reality could revolutionize men’s clothes shopping,” said Won.  “We aim for 8/Omakase to be leading the cutting edge.”

The company is mostly bootstrapped (relying primarily on self-financing) with minimal seed funding.  The company maintains low overhead and just moved into modest leased offices at the Techspace Campus in Aliso Viejo, CA.

Michael Won is a 2010 graduate of the Pepperdine Graziadio School of Business and Management MBA program in Orange County.   8-Omakase was also a finalist in VatorSplash, a major startup competition in Santa Monica that took place in mid-October.  To see Won deliver his “fast pitch”, visit: https://www.youtube.com/watch?v=6rpcCOMwDNE&feature=youtu.be