Mooney: Cultivating Talent and Developing Leaders for the Creative Economy

The New Pepperdine Institute for Entertainment, Media and Culture 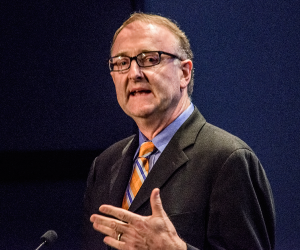 We live in a time of pervasive media and persistent entertainment. We wake up to our smart phones and fall asleep to social media. In between, we're texting, browsing, listening, posting, and streaming using individually-owned, permanently-connected, mobile, interactive digital devices. Behind those devices, other technologies have significantly lowered the barriers and costs of media and entertainment production, while the internet has disrupted traditional distribution channels and players. For digitally savvy creative artists, entertainment entrepreneurs, lawyers, and executives, this is a time of attractive alternative career paths and unprecedented opportunity.

For the Los Angeles region, the entertainment and media sectors have huge economic significance. Los Angeles is referred to by many as the entertainment capital of the world and has been home to most of the major film and TV studios since their inception. The “Creative Economy” in the broader LA region (including Orange County) was recently estimated by the LA County Economic Development Corporation to directly employ over 400,000 workers in 2013, during which it contributed almost $140 billion to the region’s gross regional product. One in seven jobs in LA County directly or indirectly serve the creative economy.

Over the past decade, the area from Santa Monica to Playa Vista has become known as “Silicon Beach”, a major hub for interactive video games and digital media, with significant presence by new entrants such as Netflix, Google YouTube, Yahoo and Amazon. These new entrants, combined with the emergence of “digital” and “interactive” divisions within the studios and established players, are clear indications that the entertainment and media sectors are undergoing a “radical transformation.” This transformation is presenting complex challenges for the traditional players as well as exciting entrepreneurial opportunities to those with the vision, knowledge and competencies to pursue them. Both large, established firms and small new ventures will need talent and leaders to envision the future and to successfully execute toward that future.

Recognizing the importance of these rapidly changing entertainment trends, and the economic and cultural significance of the entertainment and media sectors, Pepperdine University recently launched the Institute for Entertainment, Media and Culture,  Our vision for iEMC is  to provide education for  a new generation of multi-disciplinary Pepperdine graduates, who are uniquely positioned for impactful leadership roles within the transforming sectors of media and entertainment. Capitalizing on Pepperdine’s strategic location, vast network, and energizing mission, the institute will serve as a catalyst for cultivating values-based story-telling and professional practices that aspire to enrich lives, society and culture.

We aim to accomplish this vision by facilitating the education and development of business-savvy artists, creative entrepreneurs, entertainment executives and lawyers by fostering the design and delivery of a portfolio of curriculum and pedagogical innovations across the degree and certificate programs at Pepperdine. In addition, we will foster close relationships with and involvement by industry leaders and alumni in creative, impactful educational experiences. Finally, we will pursue appropriate applied research and “thought leadership” on the business, creative, legal, psychological, and policy issues related to media and entertainment, and their cultural and societal impacts.

At the iEMC we will study emerging media and shape entertainment for the (un)common good, forging a brighter future for our children and for society. I invite our alumni and friends to engage and collaborate with us as we embark on Pepperdine’s journey to “Cultivate Talent and Develop Leaders for LA’s Creative Economy”.

John Mooney, PhD is Executive Director of the Institute for Entertainment, Media and Culture and an associate professor of information systems and technology management at the Graziadio School of Business and Management. Dr. Mooney will lead the institute in facilitating access to cross-disciplinary courses in creative writing, film studies, media production, communications, entertainment and sports law, entrepreneurship, and innovation.