Individual Buyers Tap Home Equity Lines to Finance Sale of Businesses Valued $2 million to $50 million in 2014; Decrease in Funding from Friends and Family in Q1 2014 Compared to 2013 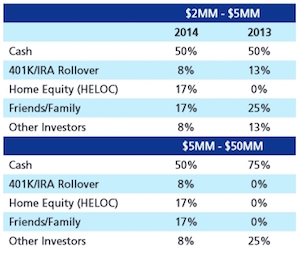 For Main Street, the number one reason driving sellers to market is business owners seeking to retire, followed by burnout. In the lower middle market, health issues are listed as one of the main reasons for selling businesses valued between the $2 million to $5 million.

Businesses valued in the $5 million to $50 million range show the greatest diversity of sale drivers since the survey began in 2012 with retirement, new opportunities, and acquisition all tied at 20 percent, followed by family issues at 13 percent.

“The older boomers are selling and the younger boomers are buying which is affecting both sides of the transaction,” said Scott Bushkie, director of IBBA and president of Cornerstone Business Services. “Despite this increased activity, values are not likely to significantly increase for Main Street opportunities as long as there continues to be a larger number of baby boomers selling than there are buyers looking to purchase.  We would need to see other market scenarios take precedence for valuations to change.”

Survey results also indicate that home equity lines of credit (HELOC) are playing a more significant role in financing lower middle market deals in 2014. HELOC financing was conspicuously absent in these categories in 2013 and the reintroduction of HELOC loans is consistent with reports of increased lending activity.

The Main Street market was dominated by individual buyers in Q1 2014, most of them first time business owners. Existing companies had the strongest presence in the $2 million - $5 million sector at 43 percent. In the $5 million -$50 million sector, private equity groups were the primary players, representing 67 percent of closed transactions.