California employers returned to hiring in October, adding 41,500 nonfarm payroll jobs after making unexpected cuts the previous month, according to official state numbers. California added more jobs than any other state, including Texas, which added 35,200 jobs. The state has increased employment 2.1% over the last year, outpacing the national average. The October upswing in hiring follows a revised decline of 14,200 jobs in September — a more drastic drop than the originally reported 9,800 jobs lost, according to the state Employment Development Department. Most economists described September's plunge, coming after a streak of job gains starting in January, as a statistical anomaly. In October, the state's unemployment rate held steady compared to a month earlier, at 7.3%, but it is down from 8.6% a year earlier. The national unemployment rate is at a six-year low of 5.8%. "Overall, the state is showing good momentum," said Lynn Reaser, an economist at Point Loma Nazarene University. "The good news is that it seems to be quite a broad-based expansion. There's a lot of jobs in a lot of different areas — some low-paying but also some very high-paying."

Most major industry sectors saw gains over the last month and year. Since last October, the fastest-growing industries were construction, where employers boosted payrolls 5.3%, and professional and business services, which saw an increase of 4.5%. Continued growth in the professional and business services industry is a bright spot, encompassing a wide array of higher-paying white-collar jobs: lawyers, accountants, architects and many of those in the burgeoning tech sector. "It really shows the general vibrancy of the labor market throughout California, because it's so many different things," said Mark Schniepp, director of the California Economic Forecast. The number of construction jobs in California is still down more than 28% since peaking in February 2006, but experts pointed to the recent uptick as a promising sign for the residential real estate market in coming months."We think that, finally, new-home construction will return to being a major economic driver for the state," said Kim Ritter-Martinez, an economist with the Los Angeles County Economic Development Corp. "Seeing that strong pickup in construction jobs is a pretty good sign."

There's a lot of jobs in a lot of different areas — some low-paying but also some very high-paying. - Lynn Reaser, an economist at Point Loma Nazarene University The only major industry decline was in financial services, a category that has suffered for months. Economists pointed to a slowdown in mortgage originations this year as a likely cause for job losses in the sector. Since the job market bottomed out in February 2010, the fastest rise in California jobs has occurred in mining and logging, the state's smallest sector. Employers there have increased head counts by more than 22% to 31,300 workers. Professional and business services jobs have soared 20.6% to nearly 2.5 million over the last four years. The government sector is the only one that had a continued decline, dropping 2.4% since February 2010 to fewer than 2.4 million jobs. Despite the sustained job growth this year, experts still see signs of underlying weakness in the labor market. Average wages in California across all industries have barely risen over the last five years after adjusting for inflation, according to Bureau of Labor Statistics data.

Click here to read the full article in the LA Times. 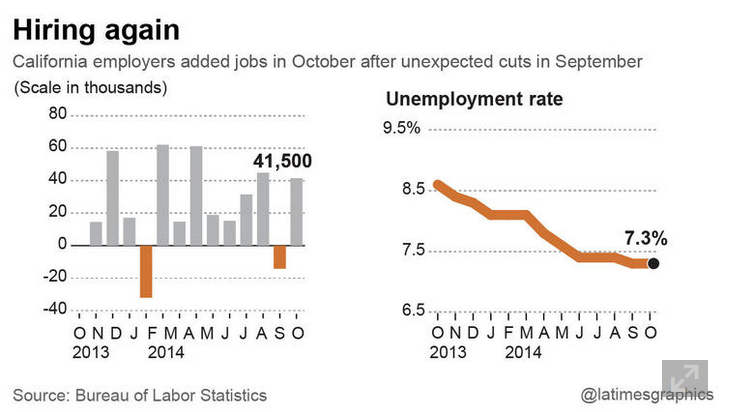